Myelodysplastic syndrome (MDS) is a bone marrow failure disorder characterized by intractable cytopenia and dysplastic hematological changes. MDS has a varied clinical course, with some patients remaining asymptomatic with mild cytopenia for a long time, while others show progressive leukemia a short time after the diagnosis. Allogeneic hematopoietic cell transplantation (*1) is considered the only curative treatment.

A research group led by Assistant Professor Takaaki Konuma in the Department of Hematology/Oncology, the Hospital of the Institute of Medical Science, the University of Tokyo (IMSUT Hospital) has demonstrated a graft-versus-tumor (GVT) effect (*2)  of a previously unknown/novel allogeneic hematopoietic cell transplantation in MDS patients. In addition, they succeeded in identifying a category of patients for whom the GVT effect was identified. These results used data from 3119 MDS patients aged 16 to 70 who are registered at the Japanese Data Center for Hematopoietic Cell Transplantation (JDCHCT).

According to Assistant Professor Konuma, the research group retrospectively evaluated the impact of acute and chronic graft-versus-host disease (GVHD) (*3) on transplant outcomes for a large cohort of adult patients with a low-risk (n = 1193) or high-risk (n = 1926) of myelodysplastic syndrome (MDS).

Their study demonstrated that for patients with a low-risk of MDS, acute and chronic GVHD at any grade or severity did not improve overall mortality, relapse, or non-relapse mortality (NRM). For patients with a high-risk of MDS, the favorable effect of limited chronic GVHD on disease relapse was associated with a decrease in overall mortality; however, the favorable effects of grade III–IV acute GVHD, or extensive chronic GVHD on disease relapse were offset by increased NRM.

Importantly, the graft-versus-tumor effect associated with limited chronic GVHD alone improved survival in those at high-risk of MDS. This GVT associated GVHD could be the explanation for the fact that excessive immune reactions, as they become clinically visible with severe GVHD, ultimately have negative effects.

For details of the research, please see the paper.
Here is Press release. 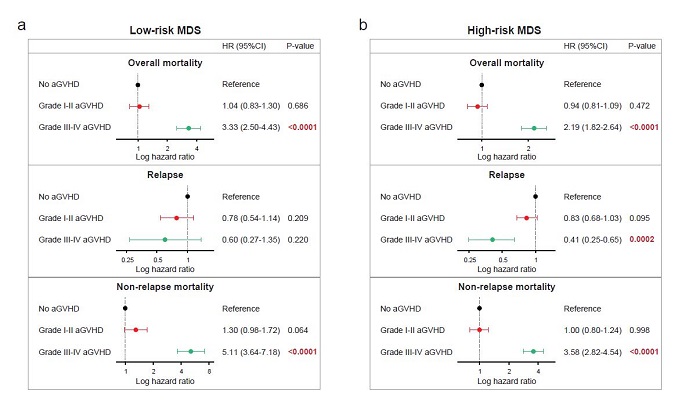 (*1)  Allogeneic hematopoietic cell transplantation
The treatment of recipients with irradiation and/or high-dose chemotherapy followed by the infusion of cells containing haematopoietic stem and progenitor cells, such as bone marrow, cytokine-mobilized peripheral blood or umbilical cord blood. It also can mediate graft­versus­tumour (GVT) effects in which donor­derived immune cells attack the host tumours, along with irradiation and/or high-dose chemotherapy for host tumors.

(*2)  Graft-versus-tumor (GVT) effect
A phenomenon in which malignant host cells are attacked by donor immune cells. Clinically, it is augmented in patients with graft-versus-host disease.