The research, published in The Lancet Infectious Diseases  is the fruit of joint project between investigators from around the world to conduct the largest individual patient data meta-analysis to date under The WorldWide Antimalarial Resistance Network（WWARN）umbrella. The study found that artemether-lumefantrine (AL) (*1) and other artemisinin-based combination therapies (ACTs) (*2) were significantly more effective than quinine, the current recommended treatment. Authors urgently call for further investigation into dose optimisation for pregnant women to ensure the highest possible treatment success.  A joint research group consisting of WWARN, A joint research group consisting of WWARN,The Nuffield Department of Medicine, University of Oxford and The Institute of Medical Science, The University of Tokyo announced on the 29th (GMT).

Pregnant women are particularly susceptible to malaria, with the infection adversely affecting both mother and fetus. An estimated 60% of pregnant women in the world live in malaria endemic regions, with 125 million pregnant women at risk every year. Despite this, expectant mothers have been hugely understudied in antimalarial clinical trials.

Typically, this group was excluded from clinical trials due to concerns over drug safety on the fetus, however the last two decades have seen increasing evidence that commonly used malaria treatments are in fact safe. Despite this, there are no agreed guidelines to assess antimalarial drug efficacy during pregnancy.

At present, quinine with clindamycin is the recommended drug to treat women during their first trimester of pregnancy. However, clindamycin is not widely available in malaria-endemic areas and quinine monotherapy is commonly used throughout all trimesters.

In this study, WWARN conducted an individual patient data meta-analysis of existing data from 4,968 pregnant women from 19 studies across 10 countries – representing 92% of patients in the available literature. Pooling and standardising the data from many regions and time-periods into a single dataset for analyses increases the statistical power needed to address key knowledge gaps, particularly when the existing data is sparse. Researchers assessed the efficacy and tolerability of quinine-based treatments and ACTs, including AL, the most commonly used ACT.

“Pregnant women no longer have to put up with quinine”

Authors found that the efficacy and tolerability of ACTs was better than that for quinine. AL had the best tolerability, but the lowest efficacy in comparison to other ACTs. Authors suggest the lower efficacy may be because dosing of AL is too low and recommend further investigation into dose optimisation.

The lead author of the study, Dr Makoto Saito, Assistant Professor at The Institute of Medical Science, The University of Tokyo(IMSUT) says: “As the safety of ACTs have been shown previously, the most efficacious drug with fewer side effects should be used to minimise the adverse impact of malaria on mother and fetus. Although the current dosing of ACT for pregnant women may not be optimal, pregnant women no longer have to put up with quinine.”

Regardless of transmission intensity, over 95% of women treated with all ACTs except AL were free of recurrence

Presence of  gametocytes(*3), the sexual form of malaria parasites, were more frequent after quinine treatment compared with ACTs, this favours the use ACTs as they will be reducing the overall transmission of malaria parasites. Quinine was associated with lower tolerability due to higher risks of side effects such as abdominal pain, nausea and vomiting. This could be further exacerbated by morning sickness in the first trimester, the time during which quinine is recommended. As pregnant women infected with malaria generally have less symptoms than non-pregnant women, they are less likely to tolerate adverse drug events.

Authors caution that updated variable local patterns of resistant to antimalarial treatments should be considered when applying these findings to specific settings, and also both efficacy and tolerability of ACTs need to be re-assessed if a new dosing regimen is proposed for pregnant women.

Prof Philippe Guérin, Director of WWARN and senior author on the study says: “The findings of this study as well as evidence of safety shown in previous research provides compelling evidence that quinine provides lower efficacy and tolerability than ACTs. Further research into drug dosing to ensure optimum treatment effectiveness for both mother and fetus is paramount.” 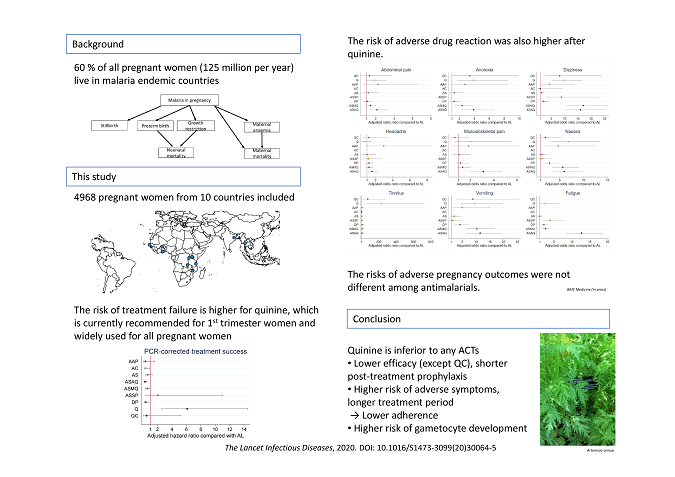 (*2) Artemisinin-base combination therapy (ACT)
Artemisinin-based combination therapy (ACT) is the current standard treatment for uncomplicated falciparum malaria in non-pregnant patients, which has decreased the mortality from malaria dramatically. ACT consists of artemisinin-derivatives and partner drug(s), which has different mechanisms of action and a longer half-life. Artemisinin is derived from an herbal plant (Artemisia annua, see picture). The 2015 Nobel Prize was awarded for the discovery of artemisinin. There are several antimalarials that can be combined with artemisinins as a partner drug.

(*3) Gametocyte
Gametocytes are the sexual form of malaria parasites, which can be transmitted from infected humans to female mosquitos by mosquito bites. Although gametocytes are not pathogenic by itself, they are thus important for the transmission and control of malaria. 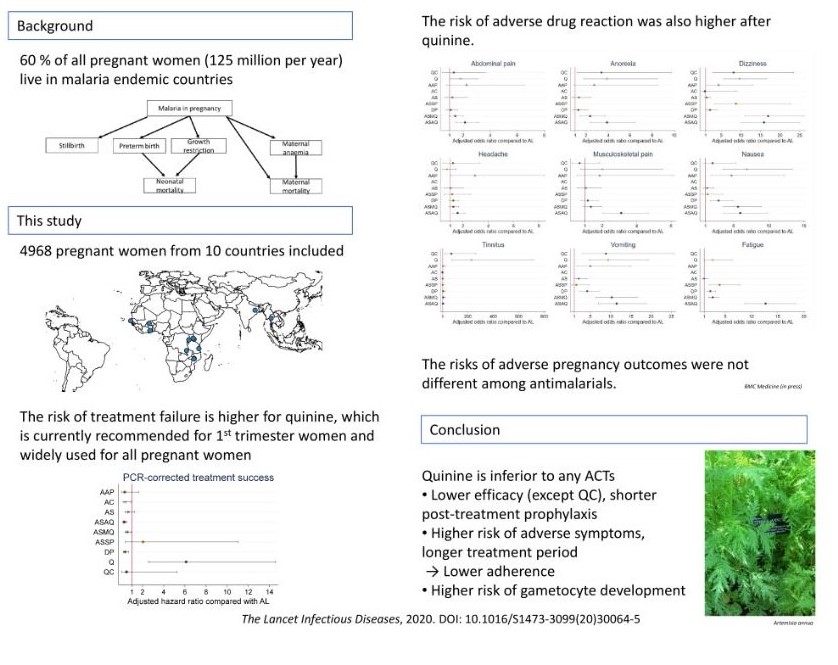 The Nuffield Department of Medicine, University of Oxford

Explore the Malaria in Pregnancy Library to comprehensively search published and unpublished literature related to malaria in pregnancy.