A Happy New Year Everybody!
And welcome back to IMSUT!

I trust that you have all enjoyed your New Year holidays with your family or friends and gained fresh energy to approach a new chapter in your professional life.

As you know, 2014 is a year of the Horse.
In Japan, a horse is considered to be an auspicious animal and to bring you good fortune, as we say in Japanese that "物事が上手（うま）くいく(everything goes well)" or "幸運が駆け込んでくる(luckiness will come rushing over to you)". If I say more precisely, 2014 is a year of the Kinoeuma（甲午）. The "Kinoe" represents a bud just shooting out of its shell and that means a starting point for innovation. And the "Uma" represents a start of the last half as it holds the 7th position among 12 animal symbols of the Oriental Zodiac. That is to say, 2014 is a year of turning point and shift of gear toward a new future, and I believe that 2014 will be a very important year which will affect IMSUT & IMSUT Hospital's future via our IMSUT One to Gogo. 2013 was a year of beginnings in establishing and strengthening the foundation of IMSUT and 2014 is a year to shift gears and push forward confidently toward our goals of IMSUT One to Gogo.

Now, before talking about our goals in 2014, I would like to introduce the accomplishments made by the excellent faculty, staff, postdocs and student members of IMSUT & IMSUT Hospital in the last years.

First of all, I would like to introduce the data on publications. Since the data for 2013 is not available yet, I introduce the data from FY2010 through FY2012. The total number of publications from IMSUT in 2010 was 573 including 71 publications with Impact Factors of 10 or more. In 2011, there were 633 papers including 51 papers with Impact Factors of 10 or more published, and in 2012 it was 576 and 54 respectively. On the whole, we can summarize that IMSUT is consistently publishing around 600 papers with a certain level of quality every year. On average, 10% of the papers are published in so-called high-impact journals. This is already an excellent result, but I hope we continue our efforts to keep this up and even to attain a higher state without being satisfied with the current achievements.

Regarding the fund-raising situation , a total number of 457 grants (4.8 billion yen) were generated by our talented IMSUT researchers in FY2013, and that includes 3 newly adopted institutional grants supported by government grant agencies (e.g., Ministry of Education, Culture, Sports, Science and Technology: MEXT, and Japan Science and Technology Agency: JST), including the "IMSUT&RCAST Excellent Graduate Schools Program" (Drs. Yoichi Furukawa and Yoshinori Murakami), "COI STREAM" (Drs. Satoru Miyano and Kohzoh Imai) and "The Program for Promoting the Enhancement of Research Universities" (Dr. Kensuke Miyake). After the reorganization of the University of Tokyo as a national university corporation in 2004, drumming up research and operation funds became one of the most important and challenging task for us due to the continual reduction in operating cost support we receive from the government. To address this problem, we have to continuously and aggressively try to generate external funds.

Further, we greatly expanded the base for international cooperation and also strengthened our regional partnerships. We newly concluded 3 research cooperation agreements with domestic and foreign universities/institutes and a partnership agreement with the Minato Ward. Research cooperation agreements were concluded with OIST (Okinawa Institute of Science and Technology Graduate University, Japan) and AGU (Arabian Gulf University, Bahrain) in July and with SCHU (Soonchunhyang University, Korea) in September. These agreements will allow IMSUT to expand the scope and opportunities for international scientific interactions between researchers and also administrative staff, and improve the environment of its internationalization strategy together with our current global scientific collaboration platforms including our joint program with the Chinese Academy of Sciences, Beijing-IMSUT laboratories and Pasteur Institute. Based on these agreements, we are planning to hold international joint symposia and set up an academic and research exchange program for students and faculty members based on a meaningful international collaborative research platform. I should also mention that the University of Tokyo has established a cross-appointment system for accelerating globalization of our academic and research environment. Prof. Hiromitsu Nakauchi took this opportunity to become a cross-appointed professor between IMSUT and Stanford University as of January 1st, 2014. We believe his cross-appointment will lead to the further advancement of our Center for Stem Cell Biology and Regenerative Medicine, allowing it to become a globalized center with full cooperation from Institute for Stem Cell Biology and Regenerative Medicine, Stanford University.

Also, it is important to note that our talented IMSUT members received prestigious awards and credit last year. In April, Prof. Yoshihiro Kawaoka was offered an honorary foreign associate membership in the National Academy of Science USA for his development of virus plasmid-based reverse genetics techniques which allowed the generation of 'designer' influenza viruses. Then, Prof. Yoshinori Murakami received the Princess Takamatsu Cancer Research Fund Prize in May. Prof. Kohzoh Imai received the prestigious Medal with Purple Ribbon and Assoc. Prof. Misako Yoneda received the Encouragement Award of the Japanese Society for Virology in November. I should emphasize that outstanding faculty members of our institute have now been recognized with the Medal with Purple Ribbon for the third year in succession, including Prof. Kawaoka, Prof. Sasakawa and Prof. Imai. I am very proud of these accomplishments made by our fellow faculty members.

As another aspect that reflects the quality of IMSUT, I would like to point out that some of our young and energetic members earned independent positions in 4 different institutes (Kanazawa University, Aichi Medical University, National Institute of Biomedical Innovation and Teikyo University) including 2 professors (Drs. Noriko Goto and Sachiko Akashi-Takamura), 1 director (Dr. Jun Kunisawa) and 1 associate professor (Dr. Jun Ooi). I hope that many of the young, talented IMSUT scientists who are obtaining their research training here will continue to follow the path of establishing new independent research teams outside of our institute and hospital.

Aside from these accomplishments, we also experienced a breath of fresh air with the promotion and recruitment of professors and associate professors over the past year. Last year, we welcomed Dr. Yataro Daigo as a project professor of the Center for Antibody and Vaccine Therapy of IMSUT Hospital, and several talented investigators were promoted to the rank of both associate professor and project associate professor. Further, as illustrated on the slide, several young promising investigators were promoted to the level of senior assistant professor and project senior assistant professor in both the institute and hospital. In the Administration Section, we also welcomed a new General Manager, Ms. Kikue Konno, and a new Manager, Mr. Yuji Hirano. I also would like to take this opportunity to announce our latest recruitment of a new professor, Dr. Tatsuhiro Shibata from the National Cancer Center to our Human Genome Center, IMSUT. He will be on board from the beginning of April. We are looking forward to seeing him as a new leader in the field of genome based pathological science for cancer and the creation of genome-based personalized medicine.

Now, let me remind all of you about the IMSUT One to Gogo Project.
As I have been letting you know, this project is progressing toward 2017 when it will be 125 years since the founding of our forerunner, The Institute for Infectious Disease, and 50 years since we reorganized into our current Institute of Medical Science. Toward this milestone anniversary, as you may know well, we are pursuing several projects.

One of the projects is a globalization strategy to make IMSUT and IMSUT Hospital become qualified to be the world's leading top medical science institute and coupled hospital. As you know well, it has been decided that Tokyo will host the Olympic and Paralympic Games in 2020, so promoting further internationalization will be a social trend in Japan on a nationwide scale over the next several years. We, as a representative academic/research institution of Japan with the high expectations that accompany world leadership, are expected to be at the forefront of social trends and lead the way in the promotion of Japan's internationalization.

Secondly, we are planning to take the first concrete step toward the creation of IMSUT Foundation (Ikaken Zaidan). With the reorganization of the University of Tokyo as a national university corporation, we receive a steadily decreasing amount of earmarked support funding from the government. To respond to this financial difficulty, we have been working on the establishment of the IMSUT Foundation which allows us to adapt to the decreasing amounts of government funding as well as provide us with flexibilities in the productive operation of IMSUT and IMSUT Hospital for advanced basic and clinical medical science, and furthermore, allows us to give back some of our profits to the University of Tokyo and contribute to the promotion of medical science research in Japan and the world.

What is more, related to the IMSUT One to Gogo Project, we are planning to continuously enhance regional partnership with our neighboring Shirokane-dai community and Minato-ku to evolve together for mutual benefit and for the advancement of medical science. Further, we are going to launch a comprehensive effort to apply for the "Specialized International Zone for State-of-the-art Medical Science and Therapy Project" promoted by the science and technology policies of the Japanese government, which will perhaps give us preferential benefit/treatments in areas such as medical science-based pharmaceutical and medical treatment development.

Finally, I want to emphasize that all of us here today, including those who could not attend due to their duties, are all part of Team IMSUT advancing toward a common goal. We need to bring together our wisdom, power, and creativity to climb up to the officially-recognized and international-standard highest peak of medical science research institutes in the world and to make an increasing contribution to the development of basic and applied research in biological science. For our continuous progress, it is also important to focus on the training and grooming of talented and productive graduate students and postdoctoral fellows as our key driving force. I hope our young scientists take bold initiatives and gain a wide variety of research experiences domestically and internationally with great pride as an IMSUT Team member, and become indispensable and leading-role researchers of IMSUT as well as the rest of world.

In closing, I would like to share a maxim/witticism left by Gerge Bernard Shaw, 1925 Nobel Prize Laureate in Literature , "Progress is impossible without change, and those who cannot change their mind cannot change anything." We all have to take initiative to change our institute to become the world number one medical science research institute and hospital. Let's not be afraid to take action for change.

Again, thank you from the bottom of my heart for your wonderful job to date, and I look forward to the continuous hard work and outstanding performance you will show as an important member of IMSUT throughout the coming year. I wish you all a healthy and wonderful 2014.

Thank you for your kind attention. 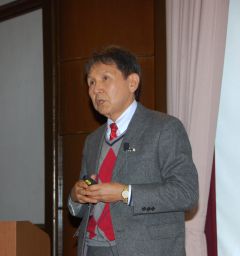 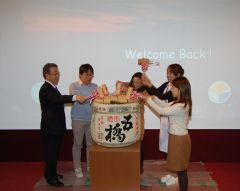