Akemashite Omedetou gozaimasu!
I wish you all a healthy and fulfilling New Year, and trust that you all return well rested and refreshed after spending the New Year holiday with those near and dear to you. But in a sense, you have returned now to your "other" family, your coworkers and colleagues at IMSUT, as we set off together on this New Year.

Last year, there was a significant event for all biomedical scientists in Japan: Prof. Shinya Yamanaka of Kyoto University received the Nobel Prize in Physiology and Medicine for discovering how to created induced pluripotent stem cells (iPS). While he was not the first Japanese to receive this prize, he was the first to receive it for research actually carried out in Japan. Of course we remain proud of Koichi Tanaka's 2002 Nobel prize in Chemistry for work enabling protein mass spectroscopy which was also conducted in Japan, and Dr. Tanaka remains a Visiting Professor of our institute. But Yamanaka's Nobel Prize shows anybody who might have doubted it that academic biomedical scientists working in Japan can also achieve the highest peak of success. I do hope that a novel medical science discovery made by someone in this room or by other members of IMSUT will receive Nobel recognition in the near future.

Of course, there are many measures of research success. This past year you continued the upward climb of our institute, and IMSUT's impact in biomedical science continues to grow. Here is a bar graph showing the most recent information we have for scientific papers from IMSUT published in journals with Impact Factors of 10 or more. Since the numbers for 2012 are not available yet, the graph show the years 2008 through 2011. On the surface, it would appear that we are simply holding steady, but in fact the number for 2011 doesn't show 19 papers published in Blood, whose Impact Factor dipped below 10 to 9.9 for the first time. So the trend is in the right direction, but I think we can do even better.

Aside from our publication record, we also experienced a great rejuvenation and turnover with the promotion of faculty members and recruitment of professors over the past year. Last year, we welcomed three new talented basic scientists including Drs. Mutsuhiro Takekawa, Koji Hase and Satoshi Uematsu, as new Professors (one professor and two project professors) from whom so much can be expected over the coming years. Further, I would like to announce that Drs. Kaori Muto and Hirotoshi Tanaka were approved to be Professors of Public Policy and the Center for Antibody and Vaccine, respectively by the Professors' faculty meeting held in December 2012. The appointments will become official after February this year.

Further, as shown in this slide, it is also important to note that our talented IMSUT members earned independent positions in six different universities including four professors and three associate professors. This fact also reflects the quality of IMSUT for training and supplying high quality basic and clinical scientists to the rest of the medical science community in Japan. We hope that many of the young, talented IMSUT scientists we train will continue to follow the path of establishing new independent research teams outside of our institute and hospital.

2013, as you all know, is the Year of the Snake. While the snakes have a somewhat dark and creepy image, in Chinese tradition they are said to be intelligent and wise. Moreover, in the 60-year cycle, this is the year of the Water Snake; water snakes are said to be insightful, motivated and intellectual. Most important for our current situation, Chinese tradition says that snakes plan very carefully to make sure that events happen just as they want them to. In fact, planning is going to be a very important part of our activities at IMSUT during 2013.

2013 is the year we will complete planning for the IMSUT One to Gogo Project. We have been discussing this among the Executive Committee Members, but it will now have its own official steering committee to complete the blue print. Here are the three important components of the plan. Let me talk about each of these individually.

As you all know, the national university system underwent quasi-privatization starting in April of 2004. With every passing year since then, as a part of the University of Tokyo we receive a decreasing amount of earmarked support funding from the government. But notice that I said QUASI-privatization. The word "quasi" means that it is really not complete. Compared to private universities, our fund-raising and operational flexibility continue to be crippled by regulations, even as we compete for the best scientists and students. This is the problem that the IMSUT Foundation or Ikaken-zaidan will address: how do we raise funds and how do we create a flexible academic operation system to attract the very best scientists so that we can outcompete not only other Japanese universities, but also places like Stanford, Harvard and MIT? Funding is a key, and the IMSUT Foundation will allow us to adapt to the decreased amount of earmarked government funding as well as provide us with flexibilities in productive operation of our institute and IMSUT hospital for advanced basic and clinical medical science.

Next, the Platinum West Re-development Blue Print. This slide shows the continual changes to our campus over the decades. As you can see, the campus has undergone many changes. But the buildings along our west side are getting old. Each year earthquake building standards continue to become stricter, but many of the buildings are 30 or 40 years old. This is true not only of the laboratories, but also of the University of Tokyo International Lodge and the Nurse's Residence. We have an opportunity to create a much better facility that would answer many needs not only for IMSUT, but could serve as valuable international hub research facilities for scientists throughout the University of Tokyo, Japan and the rest of world. We have been discussing this idea since last year, including at last year's Professors' Retreat and within the IMSUT executive committee, and we plan to have a concrete blue print by the end of this year.

The third and last part of our planning is to finalize action plans for creating an advanced IMSUT and an advanced Hospital. Prof. Kawaguchi has been chairing committee concerned with bench-level research [members: (professors) Yasushi Kawaguchi, Kensuke Miyake, Kenta Nakai, Kohei Tsumoto, (administrators) Masamitsu Oikawa, Makoto Jin, Toshiyuki Ogonuki, Kiyoko Iwamoto, Junko Tsuzuku ], while Prof. Todo has been chairing the committee concerned with the clinical side of our institute [members: (professors) Tomoki Todo, Kozo Imai, Yoshinori Murakami, Fumitaka Nagamura, (administrators) Takayoshi Mikami, Yasuyoshi Miyasaka, Kazuhiro Kobuchi, Shigemi Aizawa]. Between these two Action Plans, we will have a clear way forward for our institute to continue its climb. The report from these two important committees will be presented and discussed in the 2nd Professors' retreat scheduled for this coming weekend. We will certainly introduce the IMSUT action plan to all of you in the near future in order to obtain your ideas and constructive suggestions.

However, while these plans are very important to our future, we will also be continuing our tradition of groundbreaking research. Especially worthy of mention, our hospital has plans in place for "First in Man" clinical trials that show our concrete commitment to translational research. This slide shows the list and as you can see, it's going to be a very exciting year.

Finally, I want to emphasize that all of us here today, including those who could not attend due to their duties, are all part of one team advancing toward a common goal. We are committed to ever-rising levels of biomedical research achievements, and this requires everybody's skills, creativity, initiative, judgment and hard work. The teamwork extends far beyond just our researchers and clinical physicians. Administrators working at their desks, hospital nursing staff on the front-line of medical care-everybody's contribution is critical. I also would like to emphasize that talented and productive graduate students, and postdoctoral fellows are also a key driving force for our continuous efforts in advancing both basic and clinical science here at IMSUT. Our team is a family, and sometimes team members leave the nest to go elsewhere. But no matter where they go, they remain family and part of Team IMSUT. Only by advancing together will we reach the high goals we've set.

So in closing, thank-you from the bottom of my heart for your dedication to date, and the hard work and inspirational achievements you will continue to show throughout the coming year. I wish you all a healthy and fulfilling 2013. 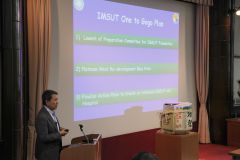 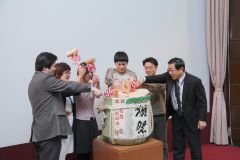