A research group at the Institute of Medical Science, The University of Tokyo in Japan, led by Professor Mutsuhiro Takekawa, has uncovered a new mechanism that elicits a cellular response by detecting oxidative stress in the human body. MTK1 SAPKKK functions(*1) is identified as a new human oxidative stress sensor that senses excess active oxygen in the body and transmits that information to cells, leading to cell death and inflammatory cytokine production. The results of this research were published in "Science Advances" on June 24, 2020.

Cells respond to oxidative stress by inducing intracellular signaling, including the stress-activated p38 and JNK MAPK (SAPK) pathways（*2）, but the underlying mechanisms remain unclear. The research team reports that MTK1 SAPKKK functions as an oxidative stress sensor that perceives the cellular redox state and transduces it into SAPK signaling.

Gene knockout experiments showed that oxidative stress-induced SAPK signaling is mediated by coordinated activation of the two SAPKKKs, MTK1 and ASK1, which have different time and dose response characteristics.

They found that the MTK1-mediated redox sensing system is crucial for delayed and sustained SAPK activity and dictates cell fate decisions including cell death, and IL-6（*3）production during respiratory burst in macrophages. Their results delineate a molecular mechanism by which cells generate optimal biological responses under fluctuating redox environments.
For details of the research, please see the paper. 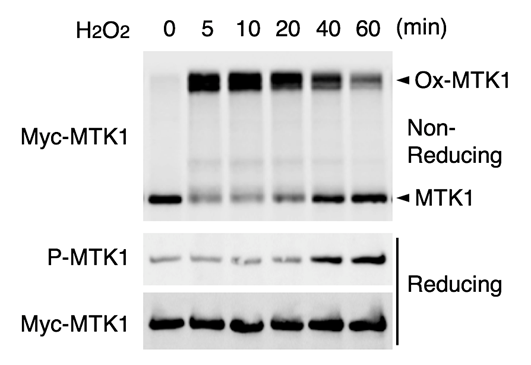 Figure 1. Oxidative stress-induced MTK1 activation requires both oxidation and reduction of MTK1.
Cells were treated with H2O2 for the indicated times. Cell extracts were electrophoresed under non-reducing conditions and immunoblotted with an anti-Myc antibody (top).  Immunoprecipitated Myc-MTK1 was electrophoresed under reducing conditions and probed with anti-P-MTK1 or anti-Myc antibodies (middle and bottom).