By transferring mouse aged hematopoietic stem cells (aged HSCs, *1) to the environment of young mice (bone marrow niche, *2), it was demonstrated that the pattern of stem cell gene expression was rejuvenated to that of young hematopoietic stem cells. On the other hand, the function of aged HSCs did not recover in the young bone marrow niche. The epigenome (DNA methylation, *3) of aged HSCs did not change significantly even in the young bone marrow niche, and DNA methylation profiles were found to be a better index than the gene expression pattern of aged HSCs.

A research group led by Professor Atsushi Iwama at the Division of Stem Cell and Molecular Medicine, The Institute of Medical Science, The University of Tokyo (IMSUT) announced these world-first results and was published in the Journal of Experimental Medicine (online) on November 24th.

"The results will contribute to the development of treatments for age-related blood diseases," states lead scientist, Professor Iwama at IMSUT.

Focus on changes in aged HSCs in the bone marrow niche

Tens of thousands of aged hematopoietic stem/progenitor cells collected from 20-month-old mice were transplanted into 8-week-old young mice without pretreatment such as irradiation. After two months of follow-up, they collected bone marrow cells and performed flow cytometric analysis. 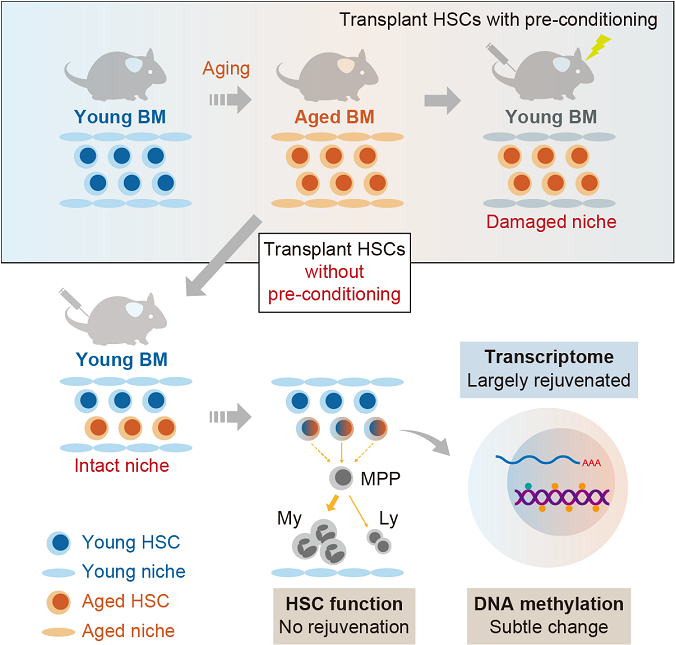 They found that engrafted aged HSCs were less capable of producing hematopoietic cells than younger HSCs. They also showed that differentiation of aged HSCs into multipotent progenitor cells was persistently impaired even in the young bone marrow niche and that the direction of differentiation was biased. It was found that the transfer of aged HSCs to the young bone marrow niche does not improve their stem cell function.
See the paper for details.

Aging studies focusing on HSCs have been actively pursued in mice using a bone marrow transfer model. However, the effect of aging on HSCs remains to be clarified.

Professor Iwama states as follows.“This study has a significant impact because it clarified the effect of aging on HSCs. Our results are expected to contribute to further elucidation of the mechanism of aging in HSCs and understanding of the pathogenic mechanism of age-related blood diseases.”

(*2) Bone marrow niche
The microenvironment in the bone marrow that is essential for maintaining hematopoietic stem cells.